The High Country Rail Trail runs (80 kilometres) from Wodonga to Shelley, with the heart of the trail running from Tallangatta to Old Tallangatta (six metres one way).

Tallangatta is recognised by the the National Trust of Australia (Victoria) as one of two 'Notable Towns'. In 1956, the town relocated to higher ground to make way for the expansion of Lake Hume. What had been up until that point a typical late-Victorian style town, was transformed into one with distinctive 1950s flair. More than 100 buildings were relocated, whilst others, such as the town's civic and commercial buildings, were redesigned in the prevailing 1950s architectural style; a restrained modernism.

Remnants of Old Tallangatta can still be seen when Lake Hume is low. Other buildings, such as the historic butter factory and northern suburb homes, escaped the flood.

This walk is accessible for wheelchairs and prams. Following the edge of Lake Hume, it meanders from Tallangatta to the Old Tallangatta Lookout where the original township thrived. At the site, numerous informative signs feature pictures and stories of the past. A picnic shelter and seating area make it a great spot to enjoy a bite before the return walk. Pack yourself a picnic. 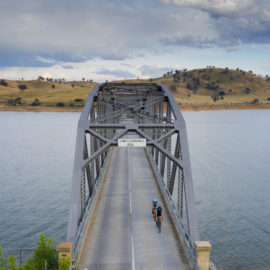 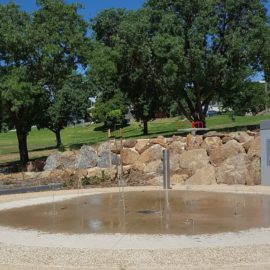